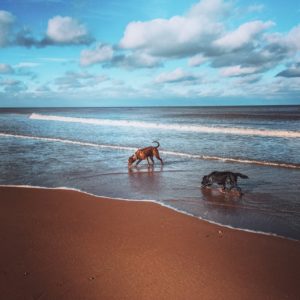 Yes, we’ve been to the beach again! We’re on a mission to make the most of our beach days before the bucket and spade brigade descend and a ban is put on all pooches. This month Fletcher had company on his trip to the seaside, his leggy girlfriend Juno; a rescue staffy cross breed. We’re still wondering whether she’s crossed with a horse, she’s huge! Though she seems to have some kind of body dysmorphic disorder and assumes she is the size of a Chihuahua.

My friend and I, joined by our husbands, and headed for the Norfolk Coast to unleash our rascals. With miles of empty sandy beach – what could possibly go wrong?

In a bid to wear them out before settling into our holiday rental by Sykes Cottage, we headed to Sea Palling to make footsteps and paw prints on the shore. Running and rolling along the sand, bouncing from boulder to boulder and paddling their paws, Fletcher

and Juno established themselves as the best of beach buddies!

Hoping they’d be exhausted as we were, we headed out to a pub for red wine to warm up in front of a fire, oh how wrong we were! The problem with Fletcher is that no amount of walk is ever long enough, he simply doesn’t tire, if there’s fun to be had he’ll just keep going, and going, and going… Not wanting to miss out Juno adopted the same mentality. So there we were, drinks in hands and demented dogs play fighting in a pub.

Not wanting to be banned from ever returning to Norfolk again, we quickly returned to the cottage, where eventually they quietened down. Well, the rolling around stopped, but they still thought it was a great idea to smack each other round the head – it was a long evening!

My favourite thing about Norfolk is that most establishments are happy to welcome our furry friends. I love that ice cream parlours, cafes and pubs have ‘watering holes’ outside, The Red Lion in Cromer even has a doggy barrel – though we didn’t go inside for lunch as it was far too busy, and the tables crammed together were a recipe for disaster, but the food did smell amazing! The fact most pubs and restaurants are dog-

friendly meant that our pooches were able to enjoy the weekend as much as we were – I wish the rest of the UK would take note from our Norfolk dog-loving businesses!

The next day we visited the seals at Horsey, two curious dogs kept well away on leads, enjoyed a wonderful walk along Cromer beach before a sunset stroll along Sea Palling once more.

The next morning, we parted ways, a tired Juno hopped in the car, while a lively Fletcher was taken for one more beach run…well, swim, much to the horror of passers by. Seriously from the looks of disappointment, you’d think I had thrown him in, which was obviously was not the case. There’s no controlling my scuba spaniel and his love for the sea!

Wrapped in clean warm towels, my coat and heating on full blast the whole two-hour journey home, I think he realised his mistake. Though I did have some peace and quiet the following week – he was EXHAUSTED!