Fletcher has taken the phrase ‘doggy paddling’ to a whole new level as we hit the water for an afternoon of dog paddleboarding in Thetford. 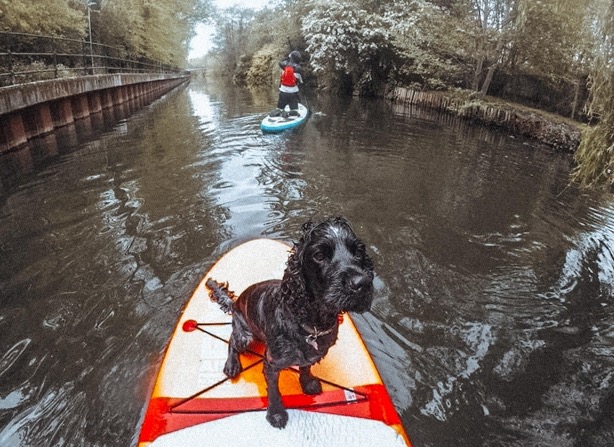 When I booked onto the taster session hosted by The Dog Backpacker, I initially began to imagine Fletcher and I cruising down a river on a board in the sunshine, Fletcher poised at the front. Then I remembered I have a crazy cocker spaniel obsessed with swimming and realised I would probably spend most of my time waist deep in muddy water. However, host Charlotte explained that paddleboarding or SUP as it also known, can be enjoyed by all types of dogs, hyper spaniels and nervous pooches included. And she was right!

Despite being one of the coldest May days on record, we hopped aboard our boards for a quick tutorial in paddling. Once I figured out how to stop going around in circles, we were off. The session was led by two instructors, Chuck and Charlotte, who guided and gave us tips along the way.

To my surprise Fletcher was more than happy to sit on the board, initially with my husband, and for the first five minutes, he sat enjoying the ride as I had hoped. It wasn’t long before he discovered it would be much more fun to jump on and off and that someone would be on hand to pull him back aboard. Cue a few shaky moves as the board swished from side to side as he leapt through the air and into the water.

He happily swam alongside my board, pulling sticks from the murky water as he went. Though he did prefer to sit at the back of the board which was unnerving as I couldn’t see when he was planning to hurl himself back into the water. I managed to stand up but I wasn’t brave enough to do so as he scrambled back aboard.

Being a sociable spaniel, he was more than happy to jump from my board, to my husbands and to the instructors…basically whoever was willing to find and throw the biggest stick for him to leap after! He probably spent 80 per cent of the session swimming, but dogs who aren’t so confident are mostly happy to sit on their owners board taking in the sights as demonstrated by Chuck’s dog, Milly.

Wet suits aren’t supplied but don’t panic, just dress sensibly. I opted for layers and sports leggings and stayed relatively dry. If you take time to slowly find your feet and balance you will stay afloat. Unfortunately, my husband didn’t listen to this advice and toppled in, twice, a mere 10 minutes into the session. Fletcher can’t even be blamed, he was on my board at the time.

It was rather amusing for the rest of us, though he was absolutely freezing by the end of the session. Thankfully we had dry clothes in the car. However, don’t worry about getting wet, it’s all part of the fun. I hadn’t even noticed my wet knees as I was having such a great time.

The company are also stepping their paws into the corporate world so if you have a dog-friendly business or employees who own dogs, you can arrange your own private session.

The Thetford location is in partnership with Bush Adventures which offers water sports, rock climbing, bush craft and more. It also supports the local community with sustainable and working initiatives.